A Romantic Onsen with Nostalgia

Surrounded by mountains on three sides, Owani Onsen is a hot spring village with over 800 years of history. During the Edo period (1603-1868), the lord of the Hirosaki domain visited the springs for its healing properties, and the area was also very busy during the Meiji, Taisho, and Showa periods, with people coming from all over the country to take a dip in the healing waters. The red-light district was also very prosperous. If you walk around the shopping district today, the town still has a nostalgic atmosphere, with retro signs and more. 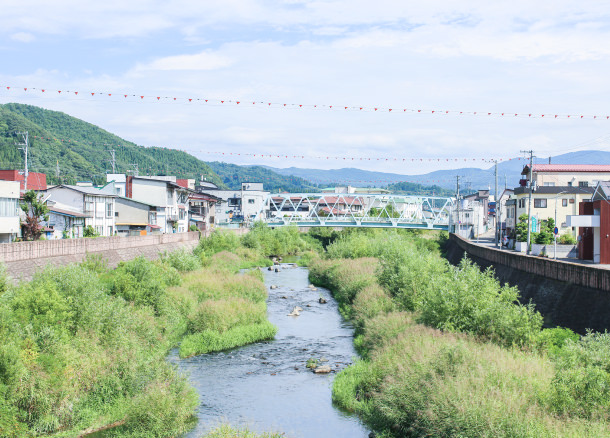 1 A Bath of Longevity

A legend about the discovery of hot springs

The onsen was discovered many years ago in the early Kamakura Period. A monk called Enchi Shonin had been walking all around Japan as part of his training when he became ill in the area where Owani stands today. When he prayed to the Buddha Dainichi Nyorai (Mahavairocana), he received a divine message saying, “If you bathe in the hot spring that wells up here, your illness shall be cured,” which led to the discovery of the hot spring. 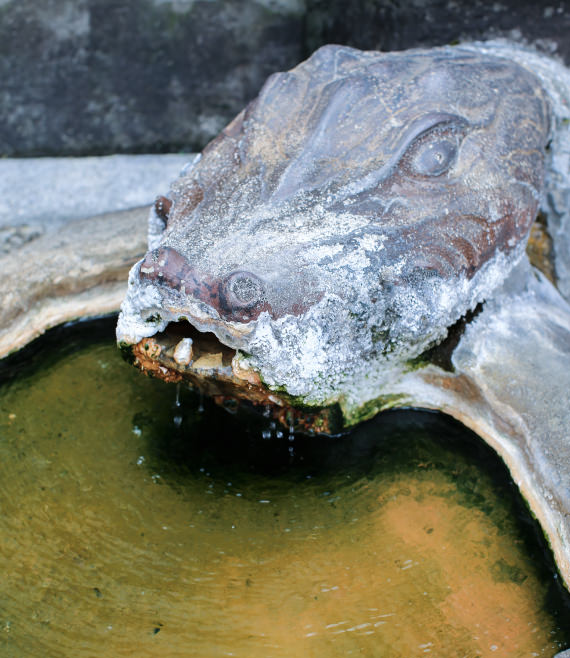 It can heal eye diseases!?
The hot spring guarded by a crocodile

At Yudamaishi Yakushido, boiling water wells from the mouth of a stone statue of a large crocodile. The lord of the Hirosaki domain had been suffering from an eye disease, and when it was healed by this spring, he built Yakushido to show his gratitude. Nowadays, it is a great spot to enjoy a footbath. Also, the address for Yakushido includes ‘Owani’ three times in a row as the subarea is called ‘Owani Owani’.

The public baths loved by the locals

In 1895, the Ou Main Line reached Owani, and Owani Station started operations. As a result, guests started coming from far away as well, and many ryokan were opened, and many public baths built. The few public baths that there were have gradually closed over time. Currently, there are only four public baths in operation. The hot spring is a sulphate spring with sodium and calcium chloride that is usually between 60°C and 80°C. The water helps alleviate neuralgia, muscle ache, and joint paint, among other ailments. 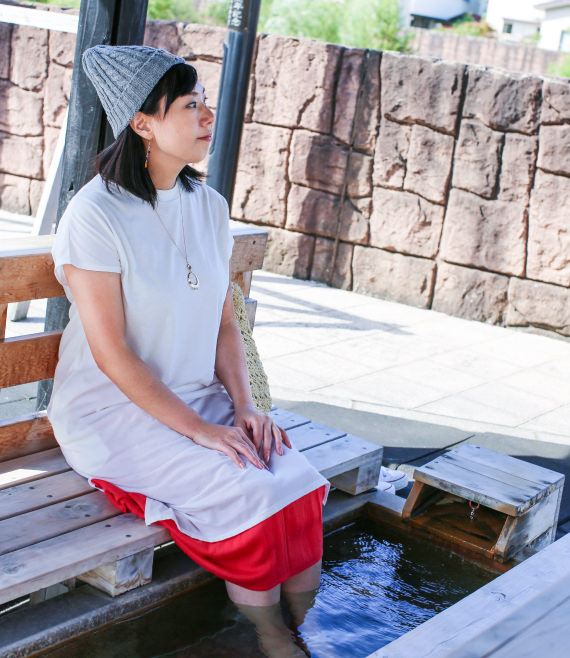 Head out from the station and go footbath-hopping

We recommend walking around Owani Onsen to visit all the different footbaths. Start by warming up your feet at the Omotenashi Foot Bath in front of the station, then enjoy a rice cracker and the view of a katsura tree and temple as you cross the red Nakano Bridge and head towards Hot Park Kagasuke. After you’ve rested your tired feet, continue on even further to Yudamaishi Yakushido, where there is a stone crocodile. It takes roughly ten minutes to walk there from the station (not accounting for time spent at each footbath). The water is very hot, so you’ll soon be nice and warm. Bring a towel to dry your feet afterwards.
*Besides the three places listed below, there is another footbath at Owani Onsen Care Center Azeria.
4/1-10/31, 9:00-16:00
7-2 Yunokawara Owani, Owani, Minamitsugaru District, Aomori Prefecture 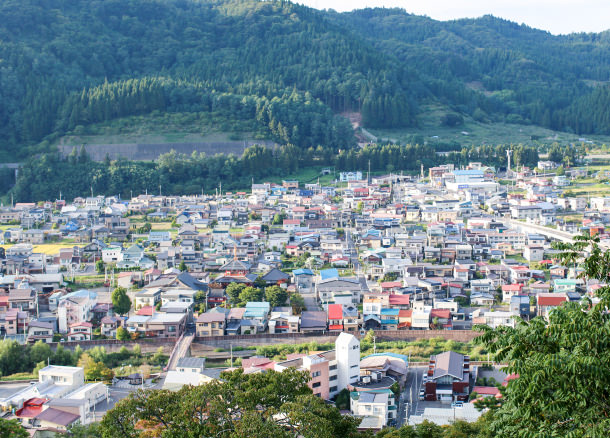 2 Walking Around the Retro Showa Town

Owani is the “town of rivers and bridges”. A small creek runs through the center of town spanned by various colorful bridges. Standing on these bridges, you can see where the surrounding mountains meet the vast sky. From the Meiji period to the Taisho era, there was a red-light district, restaurants, cafes, stores, and even multiple hairdressing salons for young visitors. The fact that many salons still operate today is a relic of that time.

Long ago, Owani was two separate villages located on either side of the River Hira, with Kuradate Village in the north and Owani Village in the south. At that time, there was only one bridge connecting the two. After the two villages merged in 1954, several bridges were built. Nowadays, there are seven different bridges along a 1 km stretch of the river: Niji-no-Ohashi Bridge, Haguro Bridge, Natsusawa Bridge, Aioi Bridge, Tsukimi Bridge, Nakano Bridge, and Aoyagi Bridge. During the winter, the river is also a resting spot for migrating birds. 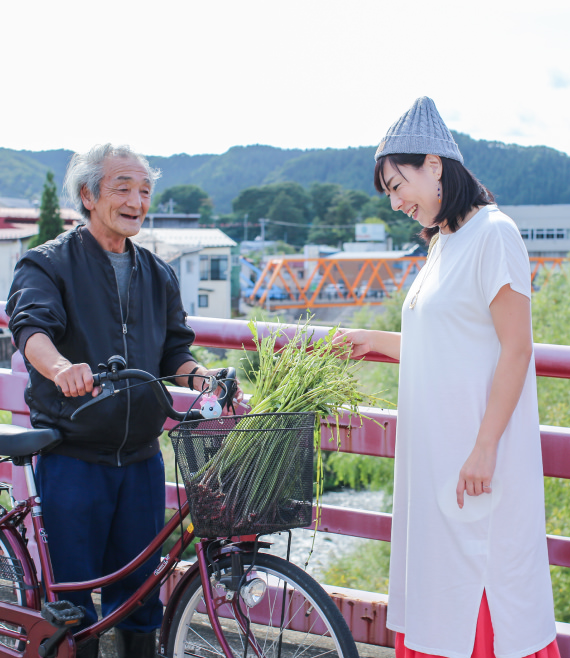 A chance encounter with a native speaker of Tsugaru-ben dialect!?

Chatting with locals on the red Nakano Bridge. His bicycle’s basket is full of mizu, a wild nettle that only grows where there is clean water. Known as the “King of Wild Vegetables”, mizu has a delicious taste that is neither strong nor bitter, and it is often served boiled, in soups, fried, or as tempura. It makes for the perfect side dish or drinking snack. The local man said, “Owani Onsen is a very comfortable place,” using the word “azumashii”.
*This word means comfortable, cozy, or beautiful in the local Tsugaru-ben dialect.

Daien-ji Temple is loved by the locals of Tsugaru as “Owani’s Dainichi-sama”. The Buddha Dainichi Nyorai, who led to the discovery of Owani Onsen, and the Ushiyu Festival’s principal object of worship are both enshrined at this temple. The principal image of Dainichi Nyorai is a nationally-designated Important Cultural Property, but it is actually an image of Amida Nyorai. It still remains a mystery why an image of Amida is being worshipped as Dainichi.

Although it is the Tsugaru ichidai-sama for the years of the sheep and the monkey, there are lots of cow statues in the temple grounds

Tsugaru ichidai-sama is a tradition in the Tsugaru region where the shrine you patron is decided by your Chinese zodiac sign. At the New Year, many people born in the years of the sheep or the monkey come to worship at Daien-ji Temple. However, since the temple is associated with the Ushiyu Festival, there are many cow statues hidden around the temple grounds. Try and count how many there are in total.

A world of nostalgia.
Café Bell

Café Bell is on the second floor of a slightly old-looking building next to the river. Climb up the stairs, and enter a world of nostalgia overflowing with retro style. The wallpaper, curtains, chandelier, and hanafuda gaming table all seem like something from a movie set. The female owner was born locally. The shop opened for business around 24 years ago. Regular customers head to the café every day to chat with the owner over a cup of coffee. Order the napolitan spaghetti (550 yen) with 2-millimeter thick noodles, and you’ll find a surprise hidden beneath your spaghetti. The dish is both delicious and filling. 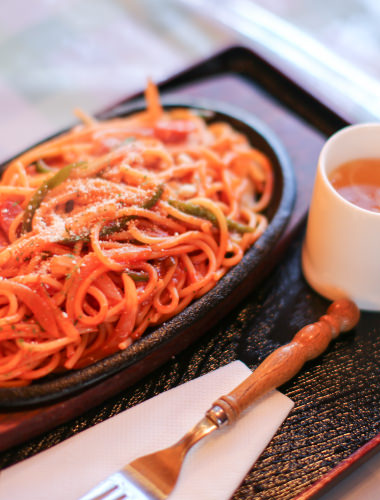 On the second floor of an old building – Café Bell

Since the building is so old, you may question whether the café is really open, but once you head upstairs, you’ll find the retro and nostalgic shop waiting for you. 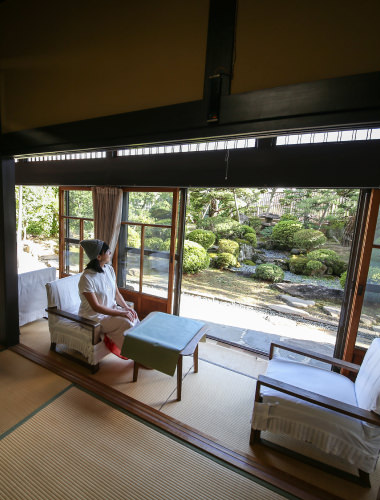 Established in 1872, Yamani Senyukan is the oldest ryokan in Owani Onsen, and the current building was constructed in 1897. The inn was loved by many literary elites, including Dazai Osamu who visited with his mother for their health. Immerse yourself in history while you enjoy a relaxed stay at the inn. 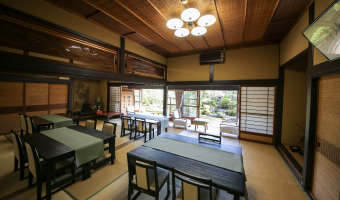 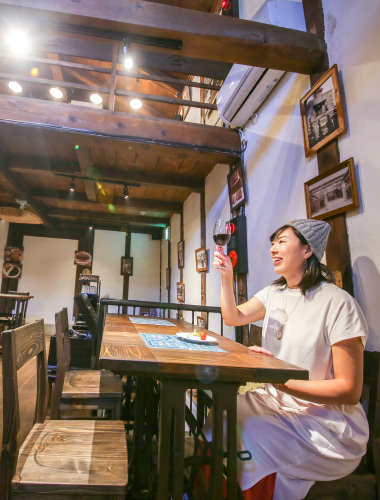 Enjoy wine and crocodile meat in a renovated storehouse!

WANY is a restaurant that operates inside Yamani Senyukan’s renovated storehouse (nationally-designated Cultural Property). The inside is decorated with old folk items and has a retro-modern calm atmosphere. Old photos of Owani Onsen are also displayed around the restaurant. The first floor is the kitchen, customer seating is on the second floor, and there is an exhibition space about Dazai Osamu on the third floor.

Climb the stairs to reach the tranquil Haguro Shrine

If you pass under the red torii gate near Yudamaishi Yakushido and climb up the hill, you will find a steep staircase near the mountains. Two cute guardian lion dogs are carved into the stone torii gate that is halfway up the stairs, as well as two dragons twisting around the gate’s pillars. Climb up another 100 steps, and you’ll finally reach the shrine’s worship hall, which is adorned with a rare curtain-style sacred rope that is unique to the Tsugaru region. It’s a quiet and beautiful place where you rarely run into other people. There is another path to the shrine from Chausuyama Park. 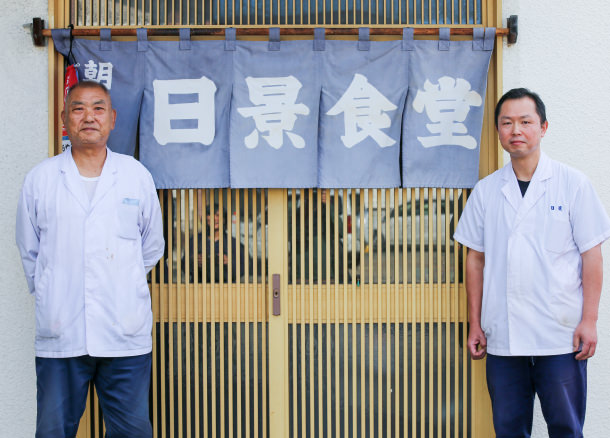 In Owani, there are three restaurants with over 100 years of history along Daenji-dori road, which leads away from the station. Standing opposite Daien-ji Temple is Asahiya Hikage Shokudo, which was established in 1897. Their “Owani Onsen Bean Sprout Ramen” (700 yen) has a salt-based broth. The third-generation owner developed a menu that incorporated western food, and the fourth-generation owner created the salt-based bean sprout ramen. The slightly low tables and chairs, which were designed to accommodate the small builds of Japanese people in the past, give the restaurant a Showa-era atmosphere. 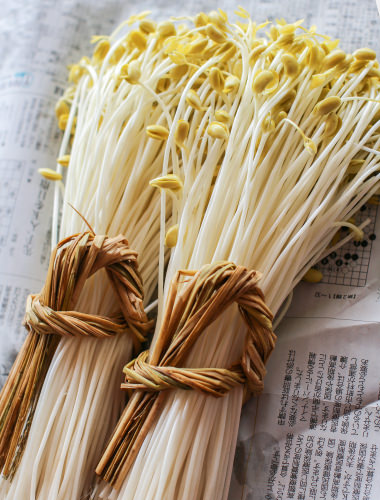 Owani Onsen’s bean sprouts boast a long history, and they have been cultivated using the heat of the local hot springs since the Edo period. They are the traditional vegetable of the Tsugaru region and are very popular due to their unique aroma, crunchy texture, and delicious flavor. You can spot them by how they are bundled together by a straw cord. Owani Onsen bean sprouts are sold at Mercato inside Wani-come.
* The peak season for bean sprouts is from November to late-April, but availability is subject to change, so please contact the store for further details. 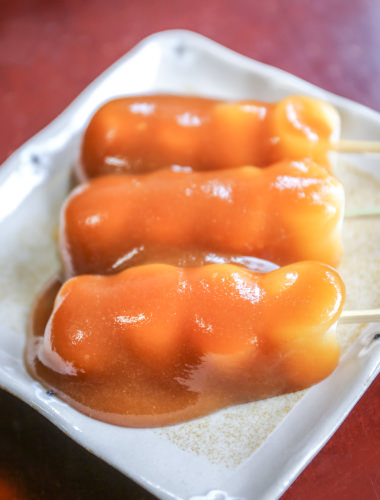 Yagihashi Mochi Sweet Shop has a sign outside saying “mochi store”. You can try inari sushi and traditional sweets that have been loved by locals since long ago, including Kuromitsu Kushi Dango, which is made using non-glutinous rice. Their goods are also sold at Wani-come. 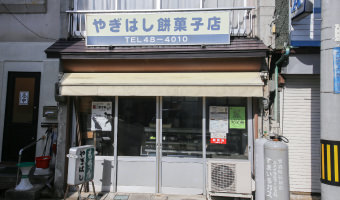 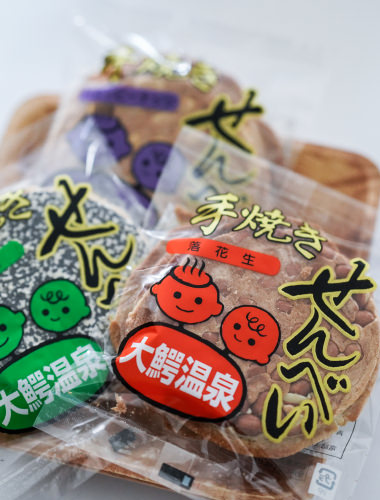 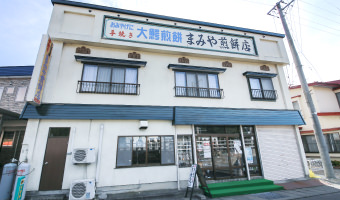 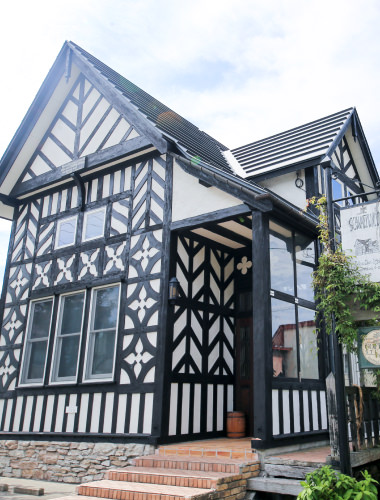 Schwarzwald:
Enter the world of fairytales

Head towards Wani-come from the station, cross the railroad crossing, and suddenly you’ll see a shop that looks like it escaped from a fairytale! It also has an English-style garden. This is the dessert restaurant Schwarzwald that sells traditional German sweets. The staff arrange the seasonal fruit desserts artistically on your plate. It’s easy to pass an elegant hour in this fashionable shop. 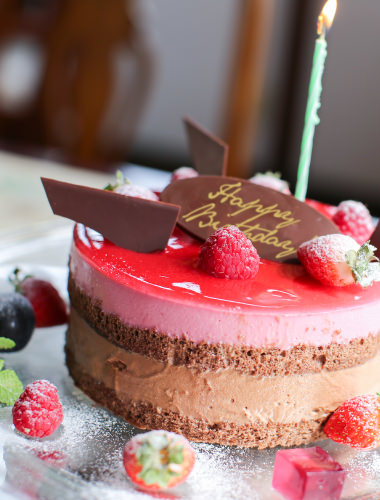 The dessert’s look and flavor will make your heart pound

You can order the standard black forest gateau or even an original birthday cake. (Birthday cakes must be ordered in advance.)

Hoshino Resort KAI Tsugaru is an onsen ryokan near Owani Ski Resort. The hotel was renovated in 2019, and the design for all the guest rooms was inspired by Tsugaru’s kogin-zashi. Tsugaru kogin-zashi is a traditional quilting technique employed by farmers in the Tsugaru region since the Edo period. It is known for its geometric designs and is a popular handicraft due to its cozy style. 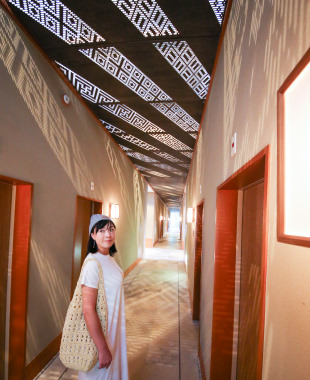 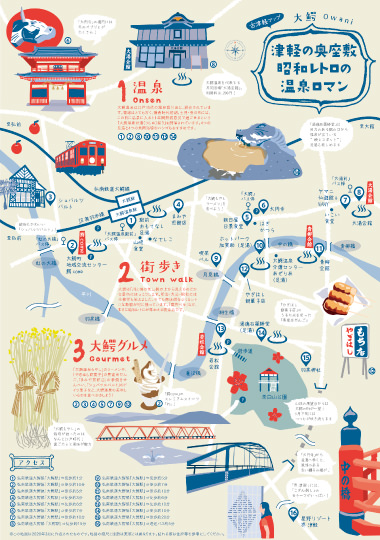 「A Romantic Onsen with Nostalgia」MAP

▲ Click here for Google Maps
Information on each spot and nearby shops is posted.