The Legend of the Oni

Oni are usually thought of as scary, evil monsters in japan, but the oni of Tsugaru are god-like creatures that are both harsh and benevolent, similar to mountains and rivers in the natural world. Even now, they are beloved as noble gods who drive away disaster and watch over children as they grow. 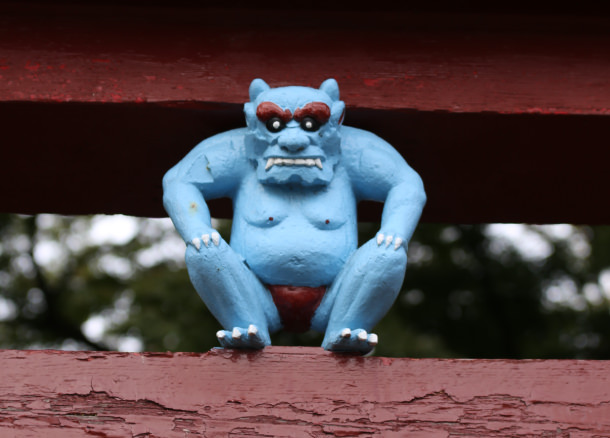 A journey to find the unique oniko

In the Iwaki River basin, which was plagued by flooding, you can find shrines that enshrine the oniko torii, a rare sight throughout Japan. Oniko is a term of endearment used by the people of Tsugaru to refer to oni. Oniko have a very unique color, shape, and expression. While carrying the torii gate on its shoulders, the oniko’s glare prevents disaster (natural disasters and plague) from entering the village. Pay attention to the oniko’s appearance from behind. It’s so cute. There are more than 40 of these unique oniko torii scattered throughout Tsugaru, and it is fun to try finding them all. The following photos feature nine of the oniko in chunan area of Tsugaru.
------------

This article about oniko torii on the blog Marugoto Aomori includes a map of all of the oniko torii gates in the area.
http://www.marugotoaomori.jp/blog/2011/02/12784.html

* oniko
In Kotsugaru, "oni" had "ko" added to the end to create the nickname "oniko"

Oniko's coloring book can be downloaded for free from the following site.
Oniko card, which provides information on oniko and restaurants in the vicinity, is also available!(Please note that the number of cards is limited and will end as soon as they runs out.)
https://www.pref.aomori.lg.jp/soshiki/kenmin/ch-renkei/kotsugaru.html 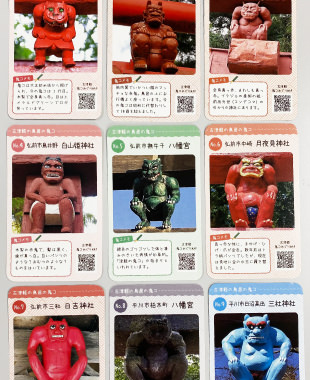 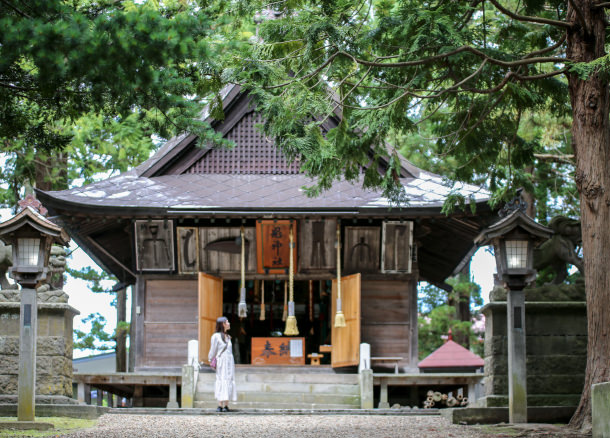 At the foot of Mt. Iwaki, there is a village called Onizawa, which is surrounded by apple orchards and rice paddies on all sides. On February 2nd, people all around Japan cry, “Luck in, oni out,” as they throw beans out the door to drive away evil as part of a celebration called Setsubun. However, in Onizawa they yell, “Luck in, oni in!” There are also many households that do not take part in mamemaki, or bean throwing. To the people of Onizawa, oni are their benefactors. They would never drive them away. The local shrine is called Ki Shrine, and commonly colled Oni shrine. A oni is enshrined here as the local deity. The Chinese character for ‘Ki’ is the character for oni. Long ago, a young boy from Onizawa called Yajuro became friends with an oni from Mt. Iwaki, and they used to wrestle and play together. When he told the oni of how the village was suffering from a water shortage, the oni built a canal in one night and saved the village from despair. Ki Shrine’s history began when the locals presented the hoe and chisel he used as an offering, and these farming tools are still displayed in the shrine today. In Japan, it is a rare sight to see old farming tools displayed in a hall of worship in this way. 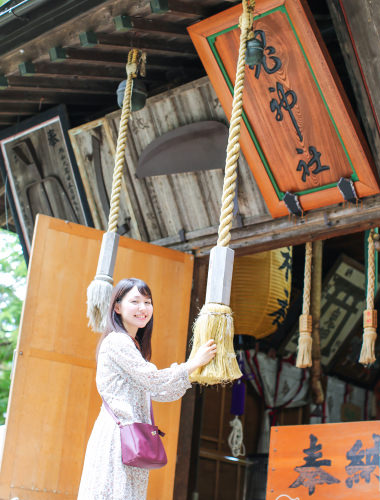 The Oni with No Horn
He loved garlic!

To thank the kind-hearted oni, the character for oni (鬼) was painted on the hall of worship and torii gates without the small horn-shapedノ stroke at the top of the character. Also, on the eve of the shrine’s festival in late June, the oni of Onizawa’s favorite food garlic is sold in the shrine grounds. Onizawa’s garlic is a valuable local variety, and it’s even delicious when eaten raw. 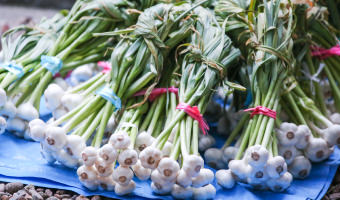 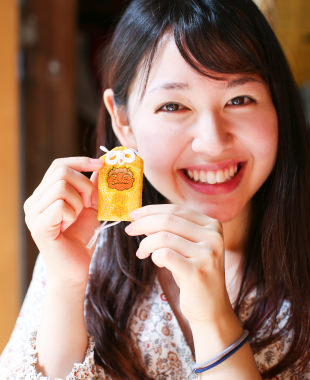 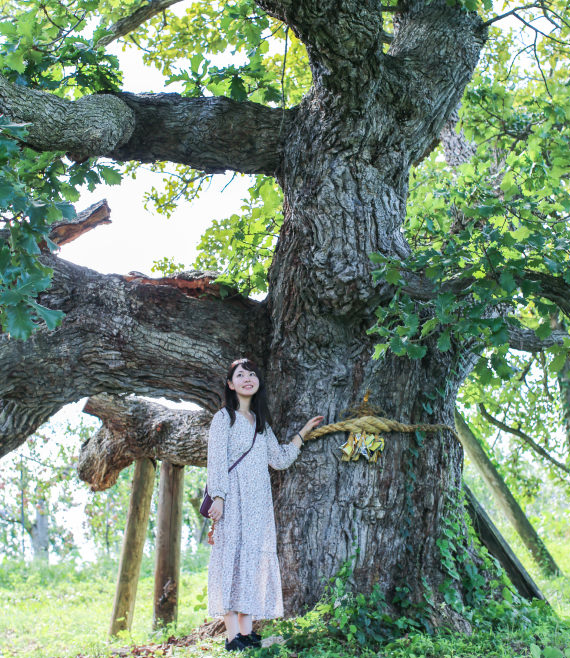 The daimyo oak tree where an oni once sat

There is a large daimyo oak tree in the middle of the apple orchards that spread out from the foot of Mt. Iwaki. They say that the oni who befriended Yajuro of Onizawa Village used to sit here, listening to Yajuro’s problems and offering his wisdom as he ate the food Yajuro brought for him. The tree is estimated to be around 700 years old. In addition, if you drive for about 10 mins, you will arrive at ‘the oni’s sumo ring’, a mysterious spot where the oni and Yajuro used to wrestle together.

The Daimyo Oak
Sarusawa, Onizawa, Hirosaki, Aomori Prefecture
Take the bus (Ajigasawa Line/Dogasawa Line) from JR Hirosaki Station for approx. 40 mins and get off at ‘Onizawa’ bus stop. Then walk for approx. 5 mins to the shrine. The tree is a 10-min walk from Ki Shrine. 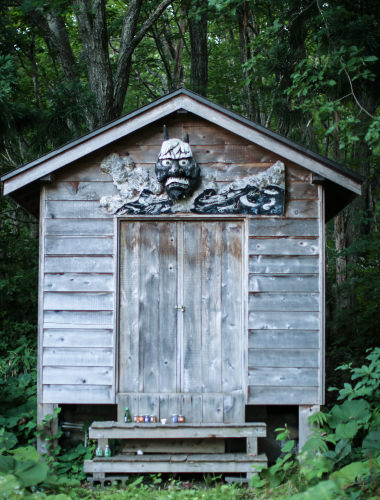 One of the peaks of Mt. Iwaki is called Mt. Ganki. Also known as Mt. Akakura, it is believed that oni make their home here. Halfway up the mountain is Akakura, which was once the largest sacred place in Tsugaru. There are still remnants left today, including a great number of huts and shrines where shamans called gomiso or kamisama used to train. 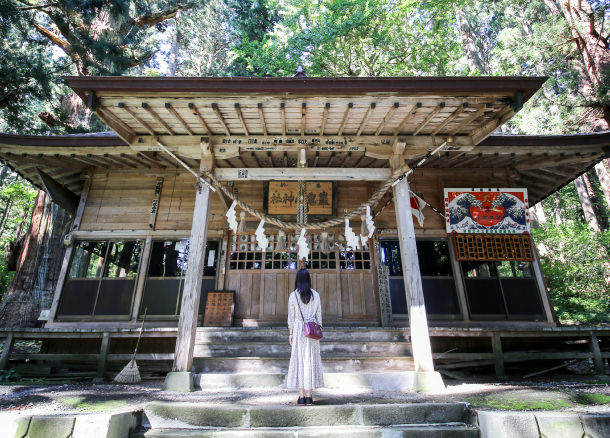 Another shrine with the character for oni in its name

In Tokoshinai, a village facing Mt. Ganki, there is a shrine called Gankisan Shrine. The character for ‘ki’ in Gankisan is also the character for oni. Many people have lived in this area since long ago, and the remains of prehistoric Jomon settlements have been excavated in Tokoshinai. The shrine was established in 796, Gankisan Shrine is said to be the birthplace of mountain worship in Tsugaru. However, since the path up the mountain from here was too steep and the head priest received a divine message, the shrine was relocated to the southern side of Mt. Iwaki (present-day Iwakisan Shrine) at the end of the Heian period.

A power spot where oni live

Even after the shrine was relocated, the locals continued to pray here faithfully, so the Hirosaki Clan rebuilt a temple to Kanon, and the shrine eventually became Gankisan Shrine during the Meiji period. The shrine grounds are enveloped in an austere yet refreshing atmosphere, with large pine trees and clear spring water. Gankisan Shrine is also known as one of Tsugaru’s power spots. This shrine is depicted on the cover of the first volume of Flying Witch, a manga set in Aomori Prefecture’s Hirosaki City. 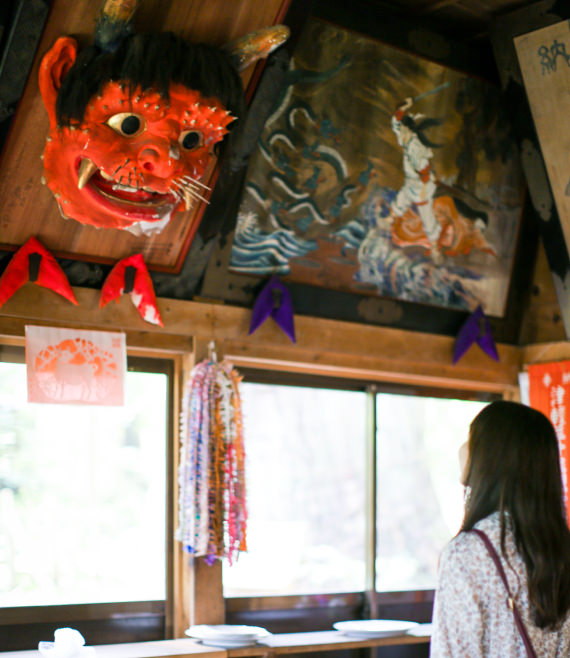 The folklore of the oni of Tokoshinai

According to one story, long ago a local blacksmith with a beautiful daughter said, “If a man can make ten swords (tokoshi) in one night, I’ll give him my daughter.” At this moment, an oni appeared and forged ten swords right then and there. The blacksmith was troubled, so he took his chance while the oni was sleeping and hid one of the swords. When the oni awoke and realized he only had nine swords, he cried, “There aren’t ten swords (tokoshi nai!),” gave up, and returned to the mountain. The words the oni shouts at the end of the tale sound exactly like the name of the village. In the area around Mt. Iwaki, there are various ruins from iron making, and perhaps this gave birth to a legend that brings together iron and oni.

Be healed by the adorable cats that live in the head priest’s home!

If you go to receive a shrine seal from the head priest’s house (the shrine office) right next to the shrine, many cute cats will come out to greet you. It’s the perfect place for cat lovers! 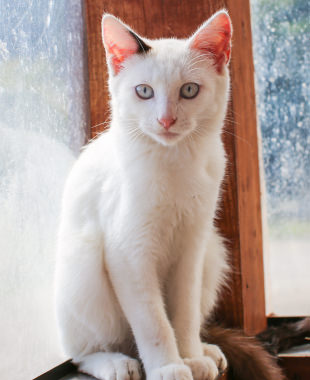 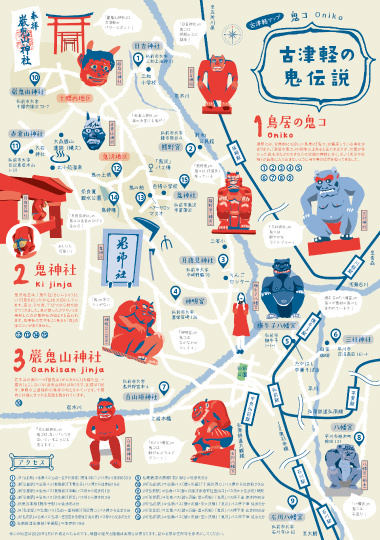 「The Legend of the Oni」MAP

▲ Click here for Google Maps
Information on each spot and nearby shops is posted.